I want to lose weight! Why diets don't work?

I want to lose weight! I've already tried everything, but I still can't do it. I will still go back to the beginning and feel that it is only getting worse. I can't lose weight permanently; I don't know how to do it. These are common words of people who are overweight.

Diets don't work!!! Not everyone has the will to hold a diet and there are so many to choose from. If we had a different diet every week, it would certainly have passed for at least a year, and we would still be eating according to another miraculous recipe. What is quite substantial, ordinary diets only choose from the small amount of food we can eat. Of course it is natural that we still miss something, we do not feel good and after a while we give up the fight against weight loss.

We have a solution for you! Workoutic - meal and workout planner.

It is an online program which is based on a large number of input values, sets the client with an accurate meal plan and workout plan according to his requirements. Client chooses one of four goals (to lose weight, gain muscles, fitness, or strength workout), sets when he wakes up in the morning and when he plans to workout, and Workoutic suggests a monthly meal plan and workout plan.

What do you get?

You are not hungry with Workoutic!

Workoutic sets a daily meal plan to distribute the energy income evenly. We feel hungry if we don't eat regularly, or we accept food with extremely high energy levels, resulting in more insulin being washed away. Subsequent insulin causes missing of sugar, and then we'll eat everything what comes to our hands. It is clear that we do not lose weight with this behavior.

The diet is not monotonous!

Workoutic offers a diet that you can customize! Either you set up a meal change in the questionnaire and Workoutic will still offer you a different menu, or you can change the items in the meal. The total energy in the food does not change. Workoutic always rewrites all the other items to maintain the necessary values ​​for protein, carbohydrate and fat intake while maintaining their ratios.

Workoutic is not a diet!

All diet programs, or weight loss programs, have one thing in common, prohibiting meals you are not allowed to eat. Workoutic doesn't work like that! Workoutic selects items from a large food database. The only thing the program sets is the amount and the correct nutrient ratios.

Everyone has a goal, but not everyone has a plan! Workoutic always plans the entire program one month in advance. The user can customize his program according to his options and requirements. Workoutic allows you to move your workout day, change your food in a diet, or add sporting activity and much more. 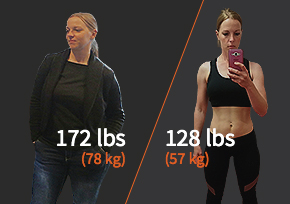 Sign up and get:
- personalized training plan
- customized meal plan


By signing up for Workoutic, you agree to our Terms of Service.

Do you have an AB blood type? Less coffee and alcohol will be the best for you.

If you have blood type A, this is the right article for you.

Do you have a blood type of 0? You are unlikely to be a vegetarian!

Like many other websites, we use cookies to provide enhanced functionality and track the usage of our websites with Google Analytics, and some of our third-party advertisers might use them to deliver adverts tailored to what they think you might be interested in.

Cookies are small text files which can be sent to browser when you visit websites and saved to your device (computer or other device with Internet access, i.e. smartphone or tablet). Cookies are saved in the folder for files of your browser. Cookies usually contain the name of the website they come from and the date of origin. Upon your next visit the browser loads cookies again and sends these information back to the website which originally created cookies. Cookies we use do not harm your computer.

Cookies are used to optimally create and constantly improve the quality of our services, adjust them to your interests and needs and improve their structure and contents. We do not use data obtained by using cookies to contact users by mail, e-mail or telephone.

Majority of browsers have been originally set to automatically accept cookies. This settings can be changed by blocking cookies or by a notification in case cookies are to be sent to your device. Instructions for changing cookies are available in the option “Help” of every browser. If you use different devices to access websites (e.g. computer, smartphone, tablet), we recommend you to adjust every browser on each of them to your preferences regarding cookies.

Using cookies and permitting cookies in your browser is your decision. However, in case you change settings of cookies, functionality of some of our websites can be limited and their user comfort reduced.

For even more information, please visit "How Google uses cookies"